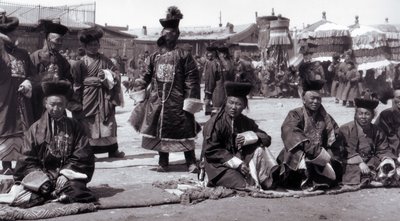 Mongolian representative S. Danzan and D. Sukhbaatar, Mongolian War
Minister were sent by Bogd Khan as negotiaters of the first Mongolian
international agreement since the ousting of Chinese occupiers during the
Mongolian national revolution of 1921.

Mongol leaders worked hard to have their independence recognized by
Russia. To that end Mongolia sent its envoys to Russia to negotiate the
terms of its recognition. Thus in the winter of 1912 Foreign Minister M.
Khanddorj visited Saint Petersburg (the then capital of Russia) and held
negotiations with Russian officials. In December of the same year, Russia
and China began talks on defining the future status of Mongolia.

In 1911 Javzandamba Khutugtu (religious title granted to reincarnated
lamas) was enthroned in Ikh Huree ( today’s capital of Mongolia -
Ulaanbaatar ) as Mongolia’s spiritual leader and head of State with the title
of Bogd Khan. Five ministries ( for internal, foreign, finance, justice and
war affairs ) were set up to run the country.